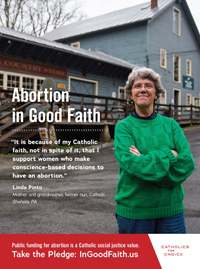 This week, Catholics for Choice released the second phase of its multi-year campaign Abortion in Good Faith that lifts up the voices of everyday Catholics nationwide who believe that all women deserve the right to equitable reproductive healthcare, including abortion access —no matter how much money they have, where they live or what they believe. Ads appeared in the Washington Post’s The Express, as well as in several papers across Illinois, including The Chicago Sun Times, The Chicago Reader, The Marion Republican, The Carbondale Times, Benton News, Du Quoin Call, Eldorado Journal and Harrisburg Register.

The ads are timed to reflect on the 41st anniversary of the passage of the Hyde Amendment on September 30, which restricts federal funding for abortion, unfairly targeting women who rely on federal assistance for healthcare and denying them the right to access an abortion. The ads in Illinois call on Governor Bruce Rauner to sign House Bill 40 (HB 40), a bill passed by the Illinois state legislature that restores coverage for abortion services for women who receive state Medicaid and for state employees.

“As Catholics, we are called upon to have a preferential option for the poor—and that means ensuring poor women have the same rights as every other woman to make their own moral decisions about when, how and whether to have a family,” said Jon O’Brien, President of Catholics for Choice.

“That is why we support public funding for abortion as do the majority of Catholics. We call on Catholics across the country to speak up and tell their representatives that the Hyde amendment is wrong; it hurts women and should be removed. State legislators, like those in Illinois, are fighting back against similar state restrictions. We urge Governor Rauner to lead by example and sign HB 40 into law.”

Many Catholics have been guided by their faith to uphold these principles of social justice and moral autonomy. Sixty percent of Catholic voters nationwide believe having an abortion can be a moral decision and a majority support Medicaid coverage for abortion.

To learn more and join our campaign, visit Abortion in Good Faith. If you live in Illinois and want to thank Governor Rauner for signing HB 40, visit here.

Note to editors: Participants of the Abortion in Good Faith campaign are available for interviews; please contact us at media@catholicsforchoice.org to schedule an interview. More information about the campaign is available at InGoodFaith.us.