After Church: How Catholics Think and Make Decisions Today

Humanae Vitae, American Catholics embraced the interpretive autonomy afforded them by the former in their decision to largely disregard the latter. The surveys sociologist Michele Dillon carried out with her colleagues, William D’Antonio and Mary Gautier, reveal that Catholics in the United States increasingly trusted their own discernment in making informed decisions on moral issues, especially those relating to sexuality and the family. They believed that one could be a “good Catholic” without adhering to church teachings on abortion, contraception, gay marriage and divorce/remarriage. This kind of negotiation is characteristic of what Dillon calls postsecular Catholicism. She takes on this challenging topic and proposes an interpretive framework in her ambitious 2018 sociological study Postsecular Catholicism.

Drawing from Jürgen Habermas, Dillon’s Postsecular Catholicism identifies the postsecular consciousness as one that “recognizes that while secularization is the settled reality, religion has public relevance and culturally useful resources for addressing contemporary societal ills.” In a postsecular society, the religious and the secular do not talk about each other but engage in dialogue with each other in acts of mutual self-critique. This postsecularism marks neither the death of secularism nor the resurrection of religion; rather, it is the “appreciation of the mutual relevance and intertwined pull of the religious and the secular.” Thus, Dillon parts ways with Habermas in his distinction between “religious citizens” and “secular citizens,” arguing instead that the religious and the secular intersect and intertwine in the lives of Catholics.

Throughout her book, Dillon examines precursors of postsecularism in the discourse of the church since Vatican II but portrays the election of Pope Francis as a significant turning point. Francis’ unlikely international stardom is due, in part, to his deft weaving of sociopolitical, economic and scientific data into his articulation of Catholic teachings. Consider Laudato Si, for example, in which Francis uses both religious and scientific arguments to support care of the environment, thereby projecting a “postsecular authority” that allows him to be taken seriously as an interlocutor in both religious and secular circles. Francis is invoked by both the left and the right in the polarized American political sphere. However, Dillon is quick to point to the irony in the conservative response to the encyclical. Catholic politicians like Paul Ryan rejected the pope’s authority to speak on this secular issue because Francis was evidently too naïve to understand that climate science is little more than a liberal hoax. (Dillon observes the irony in a claim “usually made by nonscientists who nonetheless assume they have the expertise to make this judgment.”) This dismissive tactic, which has likewise been leveled at Francis’ remarks on capitalism, represents a retreat from postsecular expectations.

Dillon struggles a bit to make the case for postsecular progress when it comes to church teachings on abortion and contraception. Though critical of John Paul II’s dualistic bifurcation of the world into the (Catholic) “culture of life” and the (secular) “culture of death,” as well as his failure to differentiate between contraception and abortion, she identifies postsecular traces in his discourse, namely, in his sociopolitical contextualization of the issue. She lauds Pope Francis for “decentering” the abortion issue and chiding the church for not placing greater focus on women’s actual circumstances. She argues that this willingness to engage postsecular self-critique—combined with the pastoral emphasis on forgiveness and understanding— “increases postsecular attunement that may cause others to take a second look and find new appreciation for the broader ethical agenda the church sets for a contrite modernity.” The church’s position on issues related to sexuality, however, is grounded in natural law arguments that suggest the church is authorized to articulate a universal moral position encompassing both the religious and secular spheres, transgressing postsecular consciousness. Dillon admits that the church’s discourse on women’s ordination is decidedly not postsecular in its outright rejection of gender equality in favor a notion of “complementarity” that has no secular translation.

The notion of complementarity is the theoretical underpinning of the United States Conference of Catholic Bishops’ (USCCB) entry into the political fray with its “religious freedom” campaign, launched as a protest against the Affordable Care Act’s (ACA) contraception benefit. As polling indicated that Americans, including Catholics, were increasingly accepting of nontraditional relationships and identities, the bishops felt their influence on American culture waning. Though contraception had not been the lightning rod that abortion was, they saw the ACA birth control benefit as an opportunity to reassert the church’s authority in questions of morality, which so often seem simply to reduce to questions of sexuality. Statements, homilies and legal briefs associated with the USCCB’s campaign were very intentional in their use of civic language, incorporating “liberty,” “freedom” and frequent citations of the US Constitution.

Combining religious and political language in this way conforms admirably with Dillon’s characterization of postsecular engagement. Yet documents pertaining to the bishops’ “messaging strategy” reveal a conscious, and arguably, cynical manipulation of language for the purpose of exercising their authority over American policies that directly impact the daily lives of millions of women, including non-Catholic women. A similar kind of linguistic legerdemain is evident in documents included in the 2018 Pennsylvania Grand Jury Report, which detailed the semantic strategies used to minimize, deflect and distract from abuse allegations.

The USCCB’s campaign against the ACA mandate was intended draw the attention of legislators and the public at large from the real issues of reproductive health and clerical power by focusing on a hallowed “religious liberty.” In short, the bishops intentionally hijacked the postsecular dialogical framework in order to subvert it for the purpose of exerting their own power over and against the secular. The irony is manifold. The bishops employ a secular vernacular to assert a position that, firstly, they have been decidedly unable to translate from its “natural law” origins into a parallel secular grammar. Secondly, their position arises out of the church’s refusal, in the lead-up to Humanae Vitae, to engage honestly in the kind of “mutual self-critique” characteristic of postsecularism because it feared that doing so would weaken its moral authority, which ended up producing a document that weakened its moral authority.

Similar issues plagued the 2014–2015 Synod on the Family and also appear to confound Dillon’s treatment of that forum. The Synod had been convened to facilitate frank discussion of the failures of the church in relation to family issues. In preparation, the Vatican took the unprecedented step of soliciting surveys from parishes the worldwide. Both the self-critical nature of the endeavor and the willingness to account for the lived realities of Catholic families conform to postsecular expectations. However, the conclusions reached at the end of the Synod suffered from the same problems as Humanae Vitae. An all-male, celibate, clerical class reached conclusions that failed to give adequate weight to the information collected from Catholic families, either because these men failed to grasp the evidence presented or chose to disregard it in favor of tradition, making the whole exercise a clerical dog-and-pony show. One unavoidable risk posed by the postsecular seems quite relevant here; namely, that while religious and secular authorities may both seek the common good, “the public priorities of both religious and secular actors lean toward a selective construal of what the common good entails.”

While reading Dillon’s otherwise excellent study, I found myself repeatedly asking two questions: one political, the other semantic. First, in her exploration of American Catholics’ “interpretive autonomy,” that is, their willingness to go against official church teaching while still considering themselves “good Catholics”, she notes that polling reveals that questions of economic justice, gender equality, reproductive rights and climate change tend to fall along political party lines. For example, 97% of Catholics who identify as conservative believe that religious freedom is under threat versus only 27% of liberal Catholics. However, Dillon does not tease out the implications here: As one interpretive authority (the church hierarchy) recedes, it is supplanted by another interpretive authority (political rhetoric). This is intriguing from sociological, psychological, theological and political perspectives and raises the question of whether American Catholics really actively embraced their autonomy or simply transferred that authority from the clerics to the politicians. This dynamic would seem to be especially relevant in her examination of the diverging political responses to the pope’s remarks on climate change and economics versus responses to the USCCB’s prolife rhetoric. While both sets of positions invoke scientific findings, in the former case, conservatives rebuke the church for speaking on issues other than religion and for relying on scientific findings that they reject, whereas in the latter case, the same conservative politicians welcome the cooperation of the church hierarchy.

The semantic question: Why did Dillon choose to employ of the more Kantian and already secularized term “autonomy” rather than framing her argument in terms of “conscience,” a word more appropriate to the topic at hand and one that is native to the conceptual framework of the American Catholics she is studying?

The validity of an interpretive framework can be evaluated in large part by its adequacy in explaining the phenomena it purports to explain. The curiosities and contradictions Dillon uncovers show her intellectual honesty but also suggest that her provocative approach may need some refinement. Nevertheless, her effort to take on this question in the first place offers a major contribution to both US political discourse and the sociology of religion more generally. 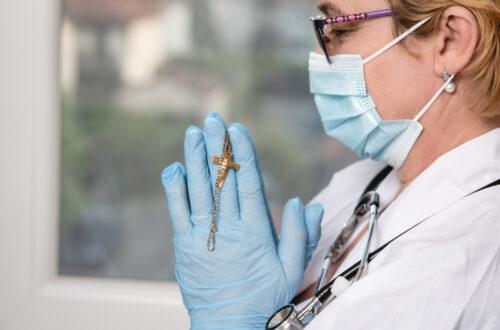