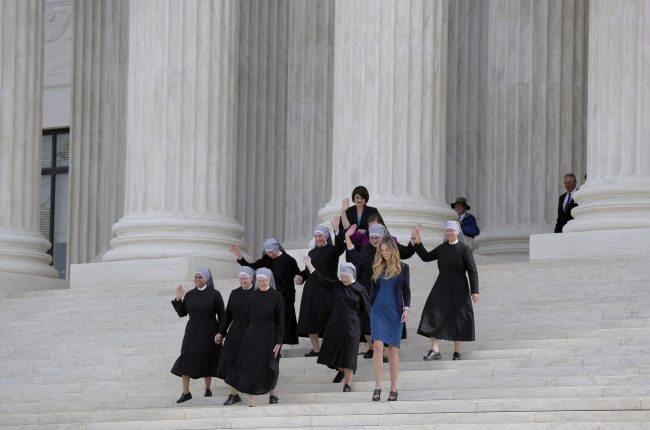 AT THE HEART OF THE CONSERVATIVE PUSH FOR so-called religious liberty lies an insidious agenda: the desire to halt social progress and maintain white patriarchal power at all costs.

The story of this agenda begins with the radical right, a coalition of conservative white political operatives who co-opted a narrow definition of what it means to be religious in a desperate bid to hold onto power. After waging a losing battle to maintain segregation in schools, the last hope of these extremists was to build a political machine to fuel their movement—its purpose to undercut any social progress that stood in their way. To accomplish this, they adopted a broader regressive policy agenda.

Knowing their agenda was unpopular with the vast majority of Americans, the radical right spent decades stealthily insinuating itself into the government, policies and politics of the United States. Aware they could not win on the merits of out-of-touch policies—including their quest to criminalize abortion—they sought, and found, other ways to build political momentum.

With the long game in mind, they began constructing a pipeline to funnel people willing to promote their extremist agenda into positions of power. Among this list of the willing was the Becket Fund—a legal organization that, under the guise of “religious liberty,” would eventually be revealed as the force behind many efforts to attack reproductive freedom and other fundamental rights. Using religion to cloak a much more sinister agenda, this group has fought tooth and nail since its foundation to undermine the rights and freedoms we hold dear.

WHO IS THE BECKET FUND?

Founded in 1994 by Kevin “Seamus” Hasson, the Becket Fund describes itself as a “religious liberty law firm and the only nonprofit, public interest legal and educational institute that protects the free expression of all religious traditions.” “Ideologically, the fund works to continue a longstanding Roman Catholic campaign to create a separate space for religious people removed from public scrutiny and laws (though while still receiving public funds and subsidies),” the Southern Poverty Law Center wrote in a 2016 profile of the organization. You may have heard of the organization thanks to two high-profile legal cases seeking to chip away at reproductive freedom. In each case, the Becket Fund strategy was to undermine the Affordable Care Act’s landmark requirement that health insurers cover birth control without co-pays. In the first case, 2014’s Burwell v. Hobby Lobby Stores, the Supreme Court put bosses in charge of birth control, allowing some for-profit corporations to deny employees coverage of contraception based on religious objections. Six years later, the court’s decision in Trump v. Pennsylvania upheld the Trump administration’s authority to issue rules allowing virtually any employer or university to declare itself exempt from the ACA’s contraception coverage policy.

NARAL Pro-Choice America and our 2.5 million members recognized the danger these decisions posed to reproductive freedom. We worked to clarify how the court exposed the radical right’s true agenda to control women and pregnant people. The Becket Fund’s legal team was, of course, involved in both cases—represent ing Hobby Lobby stores and the Little Sisters of the Poor (who intervened to support the Trump administration’s attacks on birth control coverage)—as well as several other efforts to challenge the landmark birth control benefit through the courts. Some of the Becket Fund’s endowment is contributed through dark money groups such as Donors Trust and Donors Capital Fund—organizations designed to conceal donor’s identities. As Business Insider reported in 2013, these two affiliated groups “funneled hundreds of millions of dollars of anonymous cash into the most influential advocacy groups, think tanks, academic centers and organizers in the conservative movement,” essent ially serving “as middlemen between conservative donors with a desire for secrecy and groups in need of operating revenue.” While the identities of those funding Donors Trust and Donor Capital Fund remain obscure, since 2008 the Becket Fund received at least $667,600 from each organization, according to the watchdog group Conservative Transparency.

Under the Trump administration, conservative legal organizations gained new traction. Groups like the Becket Fund not only funneled conservatives hostile to fundamental rights into the administration, but also worked to secure federal judicial appointments. Lifetime seats in our nation’s courts ensure such ideologues will serve for decades, inflicting untold damage.

Take, for example, Stuart Kyle Duncan, a former Becket Fund employee and antichoice judge appointed in 2018 to the U.S. Court of Appeals. While at the Becket Fund, Duncan represented Hobby Lobby in its Supreme Court case, his arguments deploying health disinformation straight out of the anti-choice movement’s playbook. Duncan’s confirmation for the Fifth Circuit was pushed through by anti-choice Republicans in the U.S. Senate.

Before confirmation to the federal judiciary, Duncan spent his legal career arguing in favor of numerous attempts to roll back abortion access, marriage equality, transgender rights and voting rights. Anti-choice and radical right activists never doubted Duncan’s role as a key ally in advancing their agenda. His nomination drew praise from notable figures such as the Federalist Society’s Leonard Leo and Susan B. Anthony List President Marjorie Dannenfelser. Antichoice group Students for Life lauded Duncan’s “pro-life credentials,” suggesting he would “uphold pro-life legislation” if confirmed. And that is exactly what Duncan has done.

Texas, my native state, has long been under attack from anti-choice zealots— an attack to which Duncan lent his assistance. In April 2020, he ruled to allow Texas to proceed with efforts to ban abortion during the COVID-19 pandemic— blatantly exploiting a public health emergency to advance anti-choice politicians’ quest to criminalize abortion.

Duncan is not, however, the sole Becket Fund alum Trump placed in a position of power. Appointed to lead the Off ice for Civil Rights at the U.S. Department of Health and Human Services, Roger Severino notoriously sought to undermine reproductive freedom and access to care for LGBTQ people. With blatant disregard for the law and under the guise of protecting “religious liberty,” Severino worked tirelessly to ensure a dramatic expansion of harmful refusal of health care legislation. He even created a new division of OCR— an office purporting to help protect people against discrimination in health care and enforce health care data privacy laws—to focus on emboldening refusals of care.

Other Trump administration officials with ties to the Becket Fund include former Attorney General William Barr, who served as chair of the organization’s board of advisers from 1994 to 2015, as well as former U.S. Department of Health and Human Services Secretary Alex Azar, who chaired the organization’s Lawyers’ Council.

The Becket Fund claims to fight for religious liberty, but the truth is clear to those who look a little closer. The organization uses religion to cloak its agenda of gaining and maintaining power by halting social progress.

Attacks on reproductive freedom represent only one facet of its strategy. The Becket Fund also works to undermine LGBTQ rights, including anti-discrimination and marriage equality efforts. During the COVID-19 pandemic—the effects of which have disproportionately harmed Black, Indigenous and other communities of color thanks to systemic racism and inequities in our health care system—the organization has championed efforts to block public health restrictions on in-person religious gatherings meant to safeguard our health and well-being.

While organizations like the Becket Fund claim to speak for religious people, the reality is that people across faiths support reproductive freedom. In fact, an August 2020 Public Policy Polling survey found a majority of voters of many faiths throughout battleground states support reproductive freedom and access to abortion (73% of Protestants, 70% of Roman Catholics, 83% of voters who practice another form of Christianity, 89% of Jewish voters, 60% of Muslims and 87% who pract ice another religion).

As a Jewish woman, I know firsthand that for many, our support for reproductive freedom is informed by our faith, not in opposition to it. The values of my faith call me to activism—to fight against oppression and to stand up for every one’s fundamental freedoms.

With a Trump supermajority on the Supreme Court, our rights and freedoms are on the line like never before. But the values of the majority—including the majority of people of faith—are clear: We believe in building a world where each of us has the freedom to make decisions about our families and our futures. And we will fight for it.

ILYSE HOGUE is the outgoing president of NARAL Pro-Choice America.