Bishops in the Exam Room: The ERDs and Catholic Healthcare 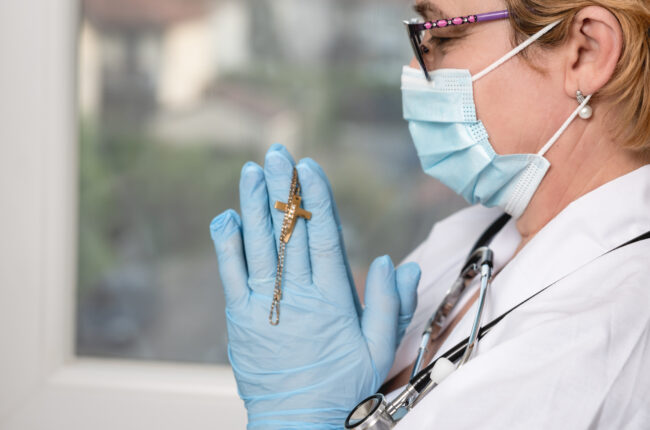 CATHOLIC HEALTH SYSTEMS OPERATE SIMILARLY to other health systems, save one major exception: All U.S. Catholic healthcare institutions follow the “Ethical and Religious Directives for Catholic Healthcare Services” (ERDs), a set of policies controlled by the U.S. Conference of Catholic Bishops to offer healthcare guidance. The ERDs govern areas of care that can conflict with Catholic doctrine, including standard medical practices like contraception, sterilization, abortion, miscarriage management, infertility treatment, and aid in dying.

In Catholic hospitals, ethics committees typically have the final word on interpreting the ERDs. At times, physicians must consult the ethics committee to ensure that treatment does not conflict with religious policies. For example, a physician would hold such a consultation for an obstetric complication for which abortion is lifesaving.

For over a decade, I have conducted research — including more than 100 in-depth interviews and two national surveys with physicians and patients — to understand how religious policies impact OB-GYN care in Catholic hospitals. My interest in the topic was first piqued when an OB-GYN told me she had to send her miscarrying patient 90 miles in an ambulance because the Catholic hospital ethics committee did not approve a straightforward procedure that the physician was trained to do. In interviews, patients and physicians described a variety of experiences with the ERDs. Sometimes the religious restrictions were clear to patients; other times they were opaque. Sometimes doctors found ways around the ERDs to meet patients’ needs, and other times they had no choice but to turn the patient away.

Written by bishops, theologians, sponsors, administrators, physicians, and other healthcare providers, the ERDs consist of 77 directives. All Catholic facilities must adopt the ERDs as hospital policy, and all staff must commit to following them. Directive 5 makes these obligations clear:

Catholic health care services must adopt these Directives as policy, require adherence to them within the institution as a condition for medical privileges and employment, and provide appropriate instruction regarding the Directives for administration, medical and nursing staff, and other personnel.

In addition to requiring compliance from all Catholic facility workers, Directive 8 explains that the ERDs may adhere to the buildings themselves if sold to a non-Catholic buyer down the road. As unlikely as it sounds, the ERDs have been attached to the sale of hospitals, with some hospitals continuing to follow the directives under non-Catholic management. In a 2018 law review paper, Elizabeth Sepper dubbed these facilities “zombies.” The MergerWatch Project, now operated by Community Catalyst, counts “zombies” in national statistics of Catholic health facility prevalence. Facilities can restrict care per religious policies regardless of formal religious affiliation. 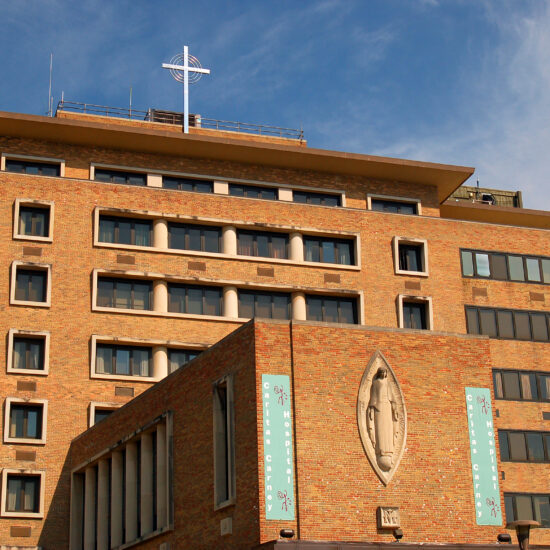 The ERDs restrict patient autonomy, especially if a patient does not know about the ERDs in advance, has restrictive insurance, or lives in a region where no healthcare alternatives exist. Directive 52 exemplifies this restriction of patient freedom:

Catholic health institutions may not promote or condone contraceptive practices but should provide, for married couples and the medical staff who counsel them, instruction both about the Church’s teaching on responsible parenthood and in methods of natural family planning.

In the Catholic hierarchy’s interpretation of natural law, sex is only legitimate when occurring in a heterosexual married couple with the intention to procreate. Before the late 20th century, the idea that sexual activity belonged solely within heterosexual marriage for the purpose of having babies seemed commonplace. Today, however, it is disputed by the sex lives of most Americans, including most Catholics. By 1973, Charles Westoff and Larry Bumpass published a paper showing that the vast majority of women identifying as Roman Catholic had used contraceptives. Today, Pew Research surveys show only 8% of Catholics share the church’s view that contraception is morally wrong. In 2011, Rachel Jones and Joerg Dreweke of the Guttmacher Institute published a report showing that 98% of sexually experienced Catholic women had used some method of contraception other than natural family planning at some point in their lives. Such data clearly portrays an environment in which the bishops have more control over Catholic health systems than Catholic laity.

By advising physicians to recommend natural family planning (NFP), the bishop’s directives put clinicians in a difficult position because of NFP’s ineffectiveness. In the first year of “typical use” with NFP, 12 to 24 in 100 women will get pregnant. In comparison, typical administration of user-controlled hormonal methods such as birth control pills, patch, and ring, only 4 to 7 in 100 will become pregnant per year. Rates of pregnancy for the methods that are not user-controlled, such as the IUD, implant, and sterilization, are fewer than 1 in 100. By barring access to contraception, Directive 52 defies both behavioral evidence and best practices in the field.

Compassionate and understanding care should be given to a person who is the victim of sexual assault. Health care providers should cooperate with law enforcement officials and offer the person psychological and spiritual support as well as accurate medical information. A female who has been raped should be able to defend herself against a potential conception from the sexual assault. If, after appropriate testing, there is no evidence that conception has occurred already, she may be treated with medications that would prevent ovulation, sperm capacitation, or fertilization. It is not permissible, however, to initiate or to recommend treatments that have as their purpose or direct effect the removal, destruction, or interference with the implantation of a fertilized ovum.

In most hospitals, patients can receive postpartum contraception and sterilization because people may struggle to meet family planning needs once at home with a newborn, and most people resume sexual activity before their six-week postpartum visit. However, Directive 53 restricts access to sterilization:

Direct sterilization of either men or women, whether permanent or temporary, is not permitted in a Catholic health care institution. Procedures that induce sterility are permitted when their direct effect is the cure or alleviation of a present and serious pathology and a simpler treatment is not available.

This restriction proves problematic when a patient requests tubal sterilization immediately following childbirth. While sterilization abuse is an ethical problem that requires ongoing vigilance, sterilization also remains the most popular method of contraception among women over 35, and 8 to 9% of deliveries are followed by a such a sterilization procedure. The doctors I interviewed were often most distressed by having to deny postpartum sterilization because it is particularly common, medically optimal, and time critical.

Sterilization prohibition directly conflicts with at least two major medical principles: The first stipulates that a physician should never do two surgeries when she can more safely do one, because surgical anesthesia, infection, and recovery make up much of the risk. This means that if the patient who wants sterilization is already undergoing a cesarean section, the physician should just tie their tubes during the surgery. According to the second principle, the physician must do the procedure that is preferred by, and best for, the patient. For many, sterilization during childbirth is the safest, most effective, most readily available, and most socially acceptable way to avoid pregnancy. During a C-section is the ideal time for sterilization, as the patient’s abdomen is already open, and even if the birth is vaginal, a laparoscopic procedure is easier and safer immediately postpartum. Pregnancy pushes the fallopian tubes near the bellybutton, so it is less invasive to access them. In addition, nursing staff are on hand to care for the newborn, unlike six weeks later when acquiring childcare is more difficult.

Abortion for any reason and at any stage is prohibited in Catholic hospitals. Directive 45 addresses abortion, firmly stating:

Abortion (that is, the directly intended termination of pregnancy before viability or the directly intended destruction of a viable fetus) is never permitted. Every procedure whose sole immediate effect is the termination of pregnancy before viability is an abortion, which, in its moral context, includes the interval between conception and implantation of the embryo. Catholic health care institutions are not to provide abortion services, even based upon the principle of material cooperation. In this context, Catholic health care institutions need to be concerned about the danger of scandal in any association with abortion providers.

In a national survey, 42% of respondents believed that they could get an abortion at a Catholic hospital if there were a fatal fetal anomaly. However, this is not the case: Patients are expected to carry to term even if the fetus will not survive. One caveat does provide an option for abortions during emergencies, which can be found in Directive 47:

Operations, treatments, and medications that have as their direct purpose the cure of a proportionately serious pathological condition of a pregnant woman are permitted when they cannot be safely postponed until the unborn child is viable, even if they will result in the death of the unborn child.

For those losing a pregnancy, the doctor may intervene only after the fetus dies or the pregnant person becomes ill enough that withholding treatment would be life-threatening. Directive 45 is burdensome for patients already in emotional and physical pain after losing a pregnancy. They must wait for treatment until those conditions are met, even if that means hours or days, which is why some physicians I interviewed chose to send such patients to non-Catholic hospitals early in the process. The directives can prevent patient-centered care during pregnancy loss, adding both an emotional and physical risk while waiting.

Although it is never explicitly mentioned in the ERDs, Catholic hospitals have denied gender-affirming surgeries several times. Multiple lawsuits detail cases of transgender patients whose hysterectomy procedures were abruptly canceled in Catholic hospitals, including Evan Minton’s case, which has risen to the U.S. Supreme Court. Catholic hospitals defend their actions citing religious rights and the ERDs’ prohibition on sterilizations. However, the lawsuits contend that this is not about the hospital’s religious freedom. Rather, the gender-affirming surgery denials are simply discrimination: Catholic hospitals allow hysterectomies for certain medical situations, but not for gender dysphoria. The U.S. bishops have stated publicly that they do not believe gender dysphoria is a legitimate medical indication and that the notion that one can change one’s gender is erroneous and immoral. Their position underlines the conflict between religious and medical definitions of health phenomena.

Patients who do not need reproductive care in Catholic hospitals can sometimes be treated. But the lack of transparency about the religious restrictions, and in some cases the lack of alternative providers that are available or covered by insurance, can be physically and emotionally detrimental. Medical staff in Catholic hospitals do a lot to work around the restrictions to minimize harm to patients, but those efforts are opaque and inconsistent. Very few in American society want reproductive care restricted by Catholic doctrine. Current laws cannot protect patients facing denials amid a crisis. Patients must at least be able to protect themselves through greater transparency about how poorly the ERDs conform to basic standards of medical ethics.

LORI FREEDMAN, PH.D., is a sociologist and a Greenwall Faculty Scholar at the University of California, San Francisco. She conducts research at Advancing New Standards in Reproductive Health (ANSIRH), a program of the Bixby Center for Global and Reproductive Health at UCSF, investigating the ways reproductive healthcare is shaped by social structure and medical culture.