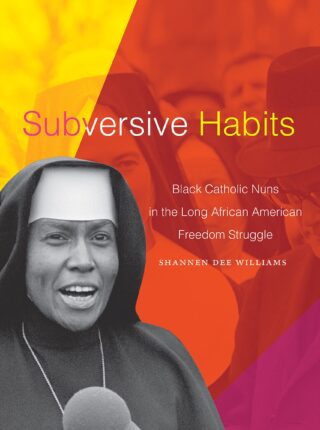 The sisters and nuns of my youth were white. Even at our family church, I had never seen a Black sister. I was named for my family member Sister Mary Antona Ebo, a Franciscan Sister of Mary and the only Black nun who marched at Selma, but she was in some ways of a mythological otherness. There was always mystery surrounding my maternal religious heritage and the women who wore the habit. So I read Shannen Dee Williams’ latest book with deep curiosity.

“Subversive Habits” is an offering, a gift, and a challenge. This dense work provides a historical recounting of the nation’s Black Catholic nuns who worked for racial and social justice but were made invisible. Williams’ meticulous recounting of the history of Black sisters fills the reader with the same wonderings that have plagued this country for the 400 years that those born on the water — Black people — have endeavored to be free. She insists that we sit with questions of who belongs, whose humanity matters, and who gets to tell the story. This book is at times uncomfortable and yet, so necessary, especially as the original sins of anti-Black racism remain unrepentant.

Threading the needle from the “passe blanc” Creole sisters in New Orleans to my deep chocolate African American namesake, Williams invites us to enter the sacred spaces that formed much of Black Catholic America. What was once assumed but never definitive is laid bare in this work — that Black sisters in the church were waging an intersectional battle against racism, sexism, colorism, and patriarchy. It is an irrefutable history.

To be Black, to be a woman, and to be a sister meant they were living reflections of the intersecting identities that the church was reluctant to embrace. Many were isolated by their orders from the time they entered religious life, often right after high school. When they chose the church, they did not know the price would be nearly insurmountable. They paid the cost of being in spaces where Black heritage was disregarded or maligned. Race, as noted by the scholar and as experienced by the lives of these Black sisters, was not something they could separate from in the same way they had to separate from their culture and families. Even the sisters who could pass as white were still scarred by a deep-seated white supremacy that impacted their ministry. Yet, they carried within them a belief that their calling had the invaluable purpose of liberating not only themselves but their people.

Subscribe to Conscience
Subscribe
“To be Black, to be a woman, and to be a sister meant they were living reflections of the intersecting identities that the church was reluctant to embrace.”

Additionally, as a womanist, I felt troubled by the ways that Black priests enabled Black sisters’ continued marginalization. This dynamic crosses denominations, as Black women have also encountered obstacles in Protestant churches.

While I applaud Williams for her work, I wish she had included conversations with Creoles and family members of these women. Her work leaves room for scholars to delve deeper into the ethnic heritage of African Americans and how regionalism contributed to their encounters with the Catholic church. Williams could have written an entire book about the ways colorism was used as a tool of white supremacy within the church and the larger society. Similarly, while Williams touched on the superficial nature of white sisters and their newfound post-Selma allyship, more can be uncovered about their use of Black sisters to further their own goals.

Admittedly, there were times as I read that I felt angry at all I did not know, at all these sisters endured, and at all the injustices committed by those who claimed to love God. Readers must contend with this book. “Subversive Habits” is one I wish I had encountered when I was a womanist scholar in seminary.

In holding up the mirror of time, Williams unearthed the suppressed history of the Black Catholic quest for liberation that predates what we know as the civil rights movement. She insists that we respect and honor these women, refusing to let their work fade into obscurity. These Black Catholic nuns were civil, racial, and social justice activists whose contributions must be told in their entirety if one expects to have a deeper understanding of not only the Catholic church, but of race relations in America.

(she/her) is a muse who can never remember not having a pen in her hand. Writing as Tayé Foster Bradshaw, she centers the voices of Black women in her creative work, book reviews, and theological studies. Named after the Black nun who marched on Selma, she is proud of her heritage of strong women who she honors with her pseudonym.