How One Nun’s Excommunication Foreshadowed the Bishops’ Attack on Biden 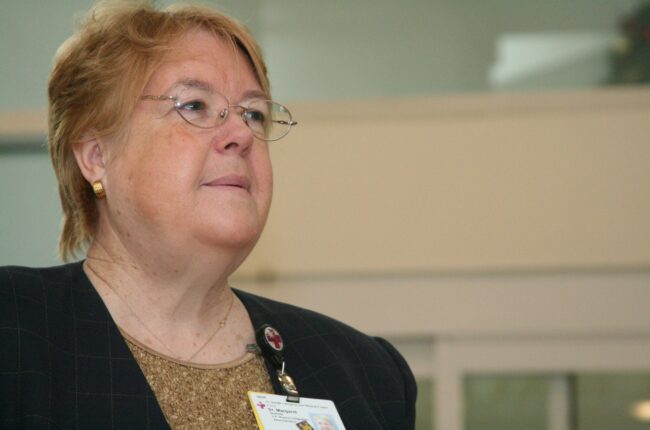 When the U.S. Conference of Catholic Bishops assembles for their biannual meetings, most Catholics rarely take notice. But when these 223 men logged into Zoom for their June 2021 gathering, it felt like the world was watching. Their agenda included space to debate whether to create a teaching document that would give their more reactionary confreres a license to bar pro-choice politicians from receiving the Eucharist. Nothing less than the U.S. president’s faith was on the line.

The conference was filled with deliberation that demonstrated, in an unprecedented public way, dissension among the ranks of the U.S. hierarchy. About a dozen men boldly spoke out against the move — a few even pointing out that this was an embarrassingly obvious political move, and one that could erode what little credibility the conference still had. But they needed a simple majority to move forward with writing the document, and they reached it handily with a secret vote of 168-55.

For some bishops, this was the moment they had worked toward for years with smaller-scale threats of denying Communion to laypeople in their dioceses. This document promised a sweeping punishment for anyone who publicly supported abortion rights.

One such bishop was Thomas Olmsted, long-reigning ordinary of the Diocese of Phoenix. At the actual meeting, Olmsted had little to say, but he was far more vocal in the months leading up to the event.

On April 1, Olmsted released an exhortation on the Eucharist, stating that leaders who take positions contrary to Catholic teaching must refrain from receiving Communion until they publicly repent. In May, he paid a visit to EWTN to pontificate about the “slaughter” of abortion and to throw his support behind San Francisco Archbishop Salvatore Cordileone’s opinion that pro-choice politicians should not present themselves for Communion.

Weaponizing the Eucharist to punish those who support abortion access has been Olmsted’s particular fixation for decades. His presence in this most recent debate conjured memories of the time, nearly 11 years ago, in his anti-choice fueled vengeance, he deconsecrated a hospital and declared a nun excommunicated.

In 2009, a woman was rushed to St. Joseph’s Hospital in Phoenix with severe pulmonary hypertension. She was 11 weeks pregnant with her fifth child, and doctors determined that there was a near 100% chance of imminent death if the pregnancy continued. Both mother and fetus were dying. Only the mother’s life could be saved. St. Joseph’s medical ethics panel, then administered by Mercy Sister Margaret McBride, approved the decision to terminate the pregnancy.

Somehow Olmsted got wind of the case. He claimed that “the equal dignity of mother and her baby were not both upheld” in the decision to abort. The baby, he believed, “was directly killed.” St. Augustine and St. Thomas Aquinas, both doctors of the church, would have found it permissible to abort a fetus at this stage of development, regardless of the circumstances. But not Olmsted.

The bishop tried for months to strong-arm the hospital, owned by the Sisters of Mercy, to cease providing all abortions, no matter the situation. St. Joseph’s administrators refused to capitulate, saying “morally, ethically and legally we simply cannot stand by and let someone die whose life we might be able to save.”

Olmsted revoked the hospital’s 115-year affiliation with the Catholic church and informed Sister McBride that she had excommunicated herself, or incurred a “latae sententiae” (automatic excommunication) by “procuring” this abortion. Just days before Christmas, Olmsted also evicted Jesus from the hospital, removing the Blessed Sacrament from the chapel and banning the celebration of Mass within its walls. The bishop called this his “duty” since the hospital and its parent company “were not committed to following Catholic teaching.”

The staff of St. Joseph’s responded with moral courage and deep theological understanding. They refused to let Olmsted use the Eucharist to bully them into submission, and they reaffirmed the holiness of their daily work. “St. Joseph’s will continue through our words and deeds to carry out the healing ministry of Jesus,” Linda Hunt, president of St. Joseph’s Hospital said after the desacralization. “Our operations, policies and procedures will not change.” Though St. Joseph’s could no longer call itself Catholic, its people vowed that it would remain a sacramental space. The sick would still be healed, the anxious would still be comforted, mourners would still be consoled.

"These theological gymnastics avoid a compelling truth that Catholics would do well to reckon with: In many, if not most, circumstances, abortion is a moral good."

In the 10 years since, St. Joseph’s has shape-shifted through various mergers, making it a perfect study of the ways the bishops’ “Ethical and Religious Directives for Catholic Health Care Services” (ERDs) are imposed in Catholic healthcare settings. These restrictions — which prohibit everything from tubal ligations to abortion — can prevent physicians from providing care. But healthcare workers have also found creative ways to circumvent the ERDs.

When St. Joseph’s was stripped of its Catholic identity, parent company Catholic Healthcare West owned the hospital. Due to Arizona’s Medicaid requirements mandate, the hospital provided contraceptive counseling, voluntary sterilization, and other practices contrary to the bishops’ restrictions, but it worked around the ERDs by offering those services through a third party.

In 2012, Catholic Healthcare West changed its name to Dignity Health and, with great fanfare, announced that it was “nondenominational” and “loosening its traditional ties to the Catholic Church.” Only two of the nine board members were women religious. Yet, still, Dignity Health permitted neither in vitro fertilization nor direct abortion.

Dignity Health merged with Catholic Health Initiatives in 2019, becoming CommonSpirit Health, a network of 24 Catholic and 15 non-Catholic hospitals and the second largest health system in the U.S. Under the merger’s complicated structure, Dignity’s non-Catholic hospitals continue to provide reproductive healthcare services forbidden by Catholic doctrine. However, these non-Catholic hospitals are still prohibited from providing or giving referrals for abortions, offering in vitro fertilization, or participating in California’s physician aid in dying law.

Today, the words “Dignity Health” loom atop St. Joseph’s webpages. Where is the dignity in blocking care for people who deserve the freedom to decide whether to have a child or not have a child? Where is the respect in stopping someone sick unto death from the right to choose a dignified passing?

While St. Joseph’s chapel remains deconsecrated to this day, the situation turned out a bit better for Sister McBride. About a year after Olmsted informed her that she had excommunicated herself, a statement from St. Joseph’s hospital announced that the longtime woman religious “met the requirements for reinstatement with the church and she is no longer excommunicated. She continues to be a member in good standing with the Sisters of Mercy and is a valued member of the St. Joseph’s executive team.” McBride still labors, to this day, as the hospital’s vice president of organizational outreach.

It is unclear what Sister McBride and her religious community said or did to get her “un-excommunicated.” Back in 2010, conservative theologian Michael Liccione posited that Sister McBride argued she had cooperated in “indirect” rather than “direct” abortion. “One could argue,” Liccione wrote in First Things, “the purpose of the abortion was not the death of the child (either as an end or as a means) but merely the removal of the child from the womb to save the mother’s life; an indirect abortion, in other words, and thus justified.” The death of the fetus was foreseen, he argued, but it was an unintended side effect of a medical procedure designed to preserve the mother’s life, which would not be condemned by the church — at least not as severely.

These theological gymnastics avoid a compelling truth that Catholics would do well to reckon with: In many, if not most, circumstances, abortion is a moral good. It can save a pregnant person’s life medically, emotionally, and economically. It can keep people out of grave danger, and it very often leads to human flourishing. Imagine what a greater force for good our church would be if Catholics could say this plainly and without fear of punishment.

"If one person gets lost in the story of Bishop Olmsted and St. Joseph’s Hospital, it is the pregnant woman who lay dying on that emergency room gurney."

Biden and the Bishops

If one person gets lost in the story of Bishop Olmsted and St. Joseph’s Hospital, it is the pregnant woman who lay dying on that emergency room gurney. Yes, she survived, but she had to live with the knowledge that the decision to save her life led to the highly publicized, permanent removal of the Eucharist from a hospital. Olmsted’s actions no doubt exacerbated her profound emotional pain and created unnecessary shame for her and her family, who already had to live with the grief of losing that pregnancy. Olmsted, in his zeal, never gave that woman or her family a second thought, nor did he consider the hearts and spirits of the countless people whom the Eucharist comforted, consoled, and nourished in the hospital chapel.

This story gets to the heart of the dynamic between the U.S. bishops and President Biden today. The hierarchy is using the Eucharist, one of our most sacred rituals and potent symbols, to coerce Catholic leaders into compromising their pro-choice values. Biden has spoken about the comfort that the church and its sacraments have given him in many moments of personal anguish. Right-wing bishops surely understand the suffering and shame that the president would experience if he were publicly banned from the table of the Eucharist. They seem to want to leverage that suffering against him. This is tragic because President Biden’s Catholic faith taught him to believe in the promotion of human health, freedom, and dignity — three moral goods that are inextricably linked to reproductive healthcare access and that undergird his support of abortion rights.

A story that played out in Phoenix more than a decade ago now has become a microcosm. These dynamics have escalated and promise, in time, to threaten any Catholic who publicly espouses pro-choice convictions. When the bishops gather again in November, the meeting will once again be highly charged and widely watched as they decide whether to ratify the teaching document that the vast majority agreed to create. They will need a two-thirds majority this time, and if June’s vote is any indication, conservative bishops seem to have the numbers they need.

Even Pope Francis himself, during a plane ride home from Bratislava on Sept. 15, told the media that bishops should be wary of wading into politics, and he insisted that he himself had never denied anyone the Eucharist. But the current U.S. bishops’ conference seems intent on going rogue.

In the end, regardless of the vote’s outcome, the long-term damage will be to both the pastoral and intellectual legacy of church leaders, as they continue to willfully ignore the suffering of those who need access to reproductive health, refuse to consider the ethical complexity of abortion, and mistrust the power of ordinary people to make choices in good conscience.

Jamie L. Manson is the Executive Editor of Conscience Magazine and the President of Catholics for Choice.