“The Turnaway Study: Ten Years, a Thousand Women, and the Consequences of Having or Being Denied an Abortion” Diana Greene Foster (Scribner, 2020. 367 pages)

NEAR THE END OF HIS SECOND presidential term, Ronald Reagan attempted to make good on a campaign promise to restrict abortion rights. He turned to Surgeon General C. Everett Koop, an evangelical Christian who opposed abortion, to issue a medical report on the physical and emotional health effects of abortion on women.

After a diligent review, Koop told the president that he could find no conclusive evidence about the ill effects of abortion on women. “In Koop’s 1989 letter to President Reagan he called for more and better research of abortion’s effects, specifically a five-year prospective study analyzing the many outcomes of sex and reproduction, including the psychological and physical effects of trying but failing to conceive ; having planned and unplanned, wanted and unwanted pregnancies; and delivering, miscarrying, or aborting pregnancies,” Diana Greene Foster writes in “The Turnaway Study: Ten Years, a Thousand Women, and the Consequences of Having or Being Denied an Abortion.” In 2007, Foster followed up on Koop’s vision to study outcomes of abortion and birth for women with unwanted pregnancies. A demographer and professor at University of California, San Francisco’s department of obstetrics, gynecology and reproductive sciences, Foster is principal investigator of a 10-year study comparing women who had abortions at the end of a clinic’s deadline and women who were turned away because they had missed the deadline.

She approaches the participants from a social science perspective, amplifying “circumstances that in some cases makes a pregnancy unwanted— such a s poverty, poor mental health, or lack of social support which might be the primary stressor that causes poor outcomes rather than the abortion itself.” These stressors look different for a person miscarrying or receiving an abortion due to fetal anomalies, so Foster excluded such cases from this study. Tracked over 10 years from 30 recruitment sites that had the latest gestational limit within 150 miles, the book provides a snapshot of the 7,851 women interviewed. Patients navigated systems of care soaked in the legislative bureaucracy and regulatory barriers of racist and fundamentalist values that complicate any attempt to acquire an abortion.

In the Turnaway Study “25% of women were in their first trimester, 30% were between 14-19 weeks and 45% were 20 weeks or later.” On a national scale, “90% of the women who have abortions do so in the 1st trimester (13 weeks and under) and only 1% do so after 20 weeks of pregnancy.” This comparison demonstrates a stark disparity between participants of the study who had abortions after 20 weeks and the national average. Throughout this book, research supports the central hypothesis about what happens to women coming in just before a clinic’s deadline to receive a wanted abortion, and what happens to those who arrive at the same clinics a few days or weeks later in pregnancy and are turned away. It is also about the state of abortion access in the United States and the lives of the people affected by it. The study paints a picture of the impacts of the third of the states currently banning abortion at 20 weeks’ gestation and demonstrates how ludicrous it is when states introduce legislation that would ban abortion at six weeks into pregnancy or earlier.

Research throughout the book reaffirms that a person’s lived experiences produce the stressors, not the abortion in and of itself. Whether or not a person is able to access the abortion they want does, however, change the trajectory of someone’s life and their options for health care access. Given that there are issues that layer onto how people seeking abortions are treated when accessing care, it is clear that people’s problems do not begin when they present for an abortion. The shame society places on their decisions is compounded with challenges before learning about pregnancy including financial and logistical barriers; mandated wait times between a clinic consultation and service; or being intimidated and terrorized by antichoice protesters shouting as they enter abortion clinics.

Preexisting mental and physical health conditions worsen during an unexpected pregnancy—a fact the study’s author, epidemiologist Dr. Corinne Rocca , under scores . Researchers separately analyzed participants’ feelings about their pregnancy and their abortion. Shifting from the more conventional focus on whether participants had an abortion at 6 or 24 weeks, the study centered on the experiences and emotions of those receiving abortions. Overwhelmingly, the most common emotion participants expressed after an abortion was relief (90%). The most common emotion participants expressed a week after having been denied an abort ion, though, was sadness (60%), followed by regret (50%), relief (49%), happiness (43%) and anger (42%).

“The Turnaway Study” also documented physical health transformations throughout pregnancy, abortion and birth in the years after participants went to the abortion clinic. Researchers found no evidence that abortion hurts women. In fact, for every outcome analyzed, “women who had an abortion were either the same, or more frequently, better off than women who were denied an abortion.”

I read “The Turnaway Study” as a Black American woman who had an abortion in Indiana, a state that is a leader in religious conservatism and a proud, hostile opponent to abortion access. Indiana feticide laws exist at a dangerous nexus of health care access, racism and xenophobia, highlighted by the criminalization of women like Chinese immigrant Bei Bei Shuai in 2011 and Indian American Purvi Patel in 2013. These two women and I did not participate in the study, but people’s experiences of access in Indiana generates a snapshot navigating health care when English is not your first language, as an undocumented immigrant, or worse yet, as victim of violence abused by your intimate partner. These circumstances provide the context for what “The Turnaway Study” sheds light on: What does an abortion make possible for the person accessing it, or the person turned away? And what are the immediate and long-term effects on their lives? Although rich in its research and analysis on the impacts and outcomes of reproductive health care, the book falls short in not tracking the experiences of nonbinary or transgender people. According to a 2010 study by the National Center for Transgender Equality and the National LGBTQ Task Force, almost one in five trans people said they had been denied care by a medical provider because of their gender identity, and 28% were subjected to harassment in a medical setting.” Though outdated, this study reflects the harmful ways our health care systems limit access to care for nonbinary and trans people.

Neither the book nor the study directly answers whether the people behind the religious, political, social and economic institutions creating barriers to abortion see anyone other than those who represent their values and opinions as neighbors—and, to be fair, that was never the study’s intended goal. For those answers, we must look to those who understand where the gaps exist in access to information, resources, racial and institutional equity. Abortion funds, clinics and advocates receive little attention, but they are who answer calls for care and offer solutions that center the people who seek abortion access.

While “The Turnaway Study” leaves the reader longing for more representation, it does demonstrate the importance of tracking experiences and outcomes of those with access to abortion and those turned away. Readers should bear in mind the words of writer and activist Renee Bracey Sherman: “Abortion for Black women has always been a revolutionary rejection of patriarchy, white supremacy and forced systems of oppression.” This book reaffirms the urgency of Sherman’s analysis and her call to action.

JASMINE BURNETT is a 3rd generation Black Midwesterner whose reproductive justice stewardship has had national impact. As a writer, she covers Black women, queer and trans leadership, cannabis equity and integrated wellness practices. Jasmine is a coach to leaders in the Reproductive Health, Rights and Justice Movement and is a trainer with the Rockwood Leadership Institute. 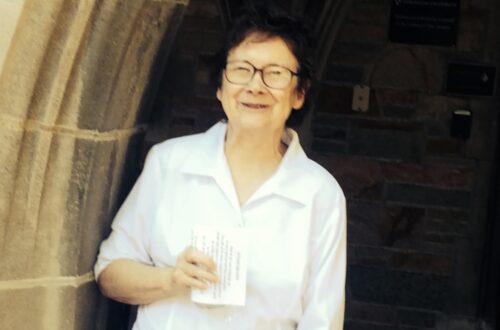 Conscience Magazine
Donna Quinn, “The Best and Brightest of the Bad Girls,” Dies at 84
Social Justice
Publication
What Secularism Means to Africa: What it has been, what it hasn’t been and what it could mean for human rights
Social Justice
CFC On The Record
Catholics for Choice – Declaración sobre la notificación de padres y/o madres
Social Justice
Make a Donation