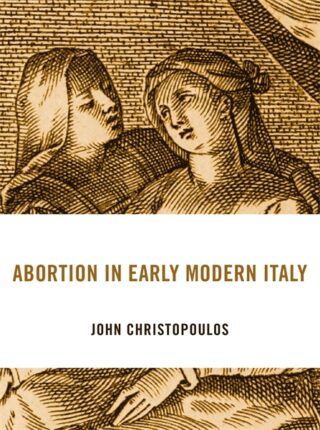 At pivotal points in Catholic history, specific individuals have caused major shifts in thinking that ripple across centuries. In “Abortion in Early Modern Italy,” John Christopoulos demonstrates how Pope Sixtus V and his 1588 bull on abortion sparked a shift in theological thought that we still grapple with today. Using extensive archival research, Christopoulos provides a detailed and nuanced description of how abortion was viewed in 16th and 17th century Italy. His analysis covers the writings of medical, ecclesiastical, and secular authorities. The author also provides tribunal testimony and individual women’s stories that illustrate the church’s shifting perspective on abortion over the centuries, moving from a private matter handled in the confessional and discreetly forgiven by local clergy, to a more rigid and public matter.

Christopoulos demonstrates that a turning point in the legal and ecclesiastical ambivalence regarding abortion occurred with the 1588 papal bull of Sixtus V, “Against Those Who Procure, Counsel and Consent in Any Way to Abortion” — a pronouncement stating that ensouled life begins at conception, and all abortion is homicide. The bull declared all participants in the procurement of an abortion be excommunicated and tried for murder, with forgiveness only accessible through the pope. This marked a radical departure from prevailing thought.

Enforcement of this bull was untenable, causing confusion and furor. Pope Gregory XIV moderated the regulation less than three years later by limiting it to ensouled fetuses, but the discussion it generated led the Catholic church down a path that culminated in Pope Pius IX’s 1869 declaration that ensouled life begins at conception.

Until Sixtus V, church authorities tended to follow classical ideas based in the writings of Aristotle and embraced by Aquinas and Augustine. In this tradition, formation of the fetus was believed to take place at 40 days for a male and 80 days for a female. (Females, they posited, were colder and moister, meaning they took longer to solidify.) Canon law adopted this formulation as the basis for deciding when a fetus was “animated.” Before animation, the fetus was not considered human. While abortion prior to that stage was considered wrong, it was not homicide. With the point of conception not always certain, common practice relied on an actual feeling of animation, the “quickening” in the womb. This, too, proved uncertain, and ambiguity surrounded any attempts to determine the fetal stage of development. For civil jurists, viability outside the womb mattered most when it came to considering penalties for abortion.

'It was widely and openly acknowledged that men’s sexual misconducts often lay at the heart of the issue.' Abortion was tolerated in this era in part because it was seen as a male-gendered practice."

Abortion was a widely tolerated part of the early modern social fabric. Christopoulos writes, “In the sixteenth and seventeenth centuries, neither clergy nor laity was willing to accept that abortion was unequivocally a mortal sin that irredeemably damned their souls.” He notes that “more often than not procurers received absolution with penance. This included clerics who sought abortions for or forced them upon women they had impregnated.”

Christopoulos’ research shows that in the rare cases when an abortion became a legal matter, jurists carefully weighed the social, economic, and practical circumstances surrounding the case. Ambivalence prevailed and both church and secular authorities often tolerated intentional terminations of pregnancy, as did the local community. They generally perceived abortion to be forgivable, acceptable, necessary, and unproblematic — unless it was accompanied by scandal and public disorder.

Even as abortion became more regulated, the ambiguity surrounding conception, fetal development, and women’s health made it difficult to prove whether a pregnancy was intentionally terminated. Illnesses such as dropsy and tumors imitated the symptoms of pregnancy, and purgatives were used to both heal women’s illnesses and to cause abortions. Misdiagnosis by either a woman or a healthcare provider could result in accidental abortions. Conversely, intentional abortion could be obscured by the claim of perceived gynecological illness. Miscarriages and stillbirth were difficult to discern from abortion and neonaticide.

"For civil jurists, viability outside the womb mattered most when it came to considering penalties for abortion."

Christopoulos notes that although much of the rhetoric regarding sexual morality and abortion was directed toward women, “it was widely and openly acknowledged that men’s sexual misconducts often lay at the heart of the issue.” Abortion was tolerated in this era in part because it was seen as a male-gendered practice. Ecclesiastical, legal, and medical authorities knew women’s bodies were generally under men’s control. Rape, abuse, and “deflowering” were male actions. Even when women consensually used sex for financial stability, ecclesiastical and civil authorities applied the legal concept of “fragilitas sexus” — physical, cognitive, and emotional weakness on account of gender.

A male network for obtaining abortion also existed. Certainly, female midwives and herbalists knew which plants and potions could terminate a pregnancy, but male apothecaries, physicians, and surgeons hired by men often provided the purgatives and bloodletting that caused abortions.

Life in early modern Italy was difficult for both men and women. The late 16th century brought poverty, economic decline, poor harvests, work-related mobility, and fragmented families. Even among elite males, younger sons were not always allowed to marry to keep estates intact. Such measures ensured that prostitution, unmarried sexual relationships, and unwanted pregnancies were part of life. Amid these social conditions, abortion became a means to prevent public scandals that would erode civic order.

Christopoulos notes that, regardless of doctrine, abortion was an act “committed in the tangle of clashing imperatives and desperate circumstance.” In addition to utilizing highly developed medical practices, early modern Italian ethical thinking was also sophisticated. Christopoulos cautions readers against viewing history through the lens of 21st century sensibilities. Yet, past and present seem similar in their ethical imperative to balance burden and benefit when making healthcare decisions. As the author states, “In early modern Italy, abortion was practiced because it was needed.”

MELISSA JONES is a healthcare journalist and an adjunct professor of liberal studies at Brandman University in Irvine, California.