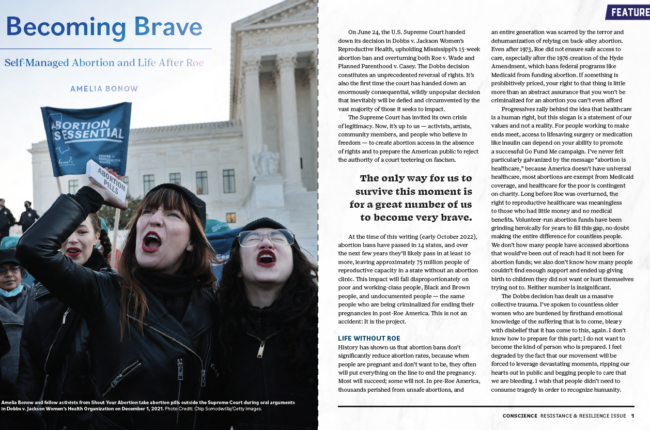 On June 24, the U.S. Supreme Court handed down its decision in Dobbs v. Jackson Women’s Reproductive Health, upholding Mississippi’s 15-week abortion ban and overturning both Roe v. Wade and Planned Parenthood v. Casey. The Dobbs decision constitutes an unprecedented reversal of rights. It’s also the first time the court has handed down an enormously consequential, wildly unpopular decision that inevitably will be defied and circumvented by the vast majority of those it seeks to impact.

The Supreme Court has invited its own crisis of legitimacy. Now, it’s up to us — activists, artists, community members, and people who believe in freedom — to create abortion access in the absence of rights and to prepare the American public to reject the authority of a court teetering on fascism.

At the time of this writing (early October 2022), abortion bans have passed in 14 states, and over the next few years they’ll likely pass in at least 10 more, leaving approximately 75 million people of reproductive capacity in a state without an abortion clinic. This impact will fall disproportionately on poor and working-class people, Black and Brown people, and undocumented people — the same people who are being criminalized for ending their pregnancies in post-Roe America. This is not an accident: It is the project.

History has shown us that abortion bans don’t significantly reduce abortion rates, because when people are pregnant and don’t want to be, they often will put everything on the line to end the pregnancy. Most will succeed; some will not. In pre-Roe America, thousands perished from unsafe abortions, and an entire generation was scarred by the terror and dehumanization of relying on back-alley abortion. Even after 1973, Roe did not ensure safe access to care, especially after the 1976 creation of the Hyde Amendment, which bans federal programs like Medicaid from funding abortion. If something is prohibitively priced, your right to that thing is little more than an abstract assurance that you won’t be criminalized for an abortion you can’t even afford.

Progressives rally behind the idea that healthcare is a human right, but this slogan is a statement of our values and not a reality. For people working to make ends meet, access to lifesaving surgery or medication like insulin can depend on your ability to promote a successful Go Fund Me campaign. I’ve never felt particularly galvanized by the message “abortion is healthcare,” because America doesn’t have universal healthcare, most abortions are exempt from Medicaid coverage, and healthcare for the poor is contingent on charity. Long before Roe was overturned, the right to reproductive healthcare was meaningless to those who had little money and no medical benefits. Volunteer-run abortion funds have been grinding heroically for years to fill this gap, no doubt making the entire difference for countless people. We don’t how many people have accessed abortions that would’ve been out of reach had it not been for abortion funds; we also don’t know how many people couldn’t find enough support and ended up giving birth to children they did not want or hurt themselves trying not to. Neither number is insignificant.

The Dobbs decision has dealt us a massive collective trauma. I’ve spoken to countless older women who are burdened by firsthand emotional knowledge of the suffering that is to come, bleary with disbelief that it has come to this, again. I don’t know how to prepare for this part; I do not want to become the kind of person who is prepared. I feel degraded by the fact that our movement will be forced to leverage devastating moments, ripping our hearts out in public and begging people to care that we are bleeding. I wish that people didn’t need to consume tragedy in order to recognize humanity. We’ll need to illustrate reality in order to change it, but ultimately, we cannot manipulate better long-term political outcomes by trafficking in fear. The only way for us to survive this moment is for a great number of us to become very brave. We need a critical mass that is committed to facilitating abortion access regardless of legality. We need to commit to saving ourselves.

This is not pre-Roe America. We have the tools, networks, medical technology, and resources to maintain access, but only if we begin to understand access as something not granted to us by politicians, but something we must create together. Abortion is not an individual issue, but a fundamental matter of justice and a community responsibility. Our movement needs broad participation, not only to get people the care that they need, but to diffuse the existing burden on activists. I’m terrified that the people I love on the front lines will burn out, or worse. Between mental health issues, substance abuse, and how cortisol and trauma can ravage a body, there are plenty of ways that this fight can kill people. 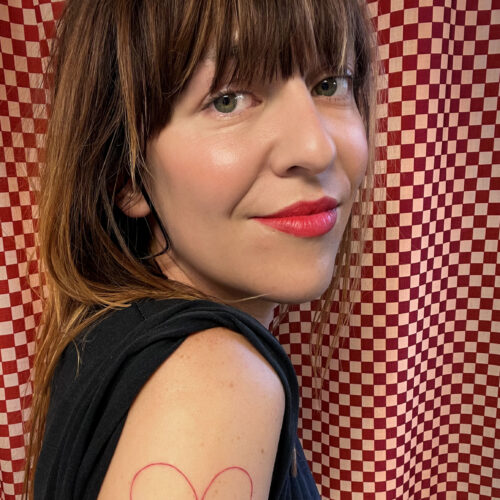 The only way for us to survive this moment is for a great number of us to become very brave.
Amelia Bonow

As clinics shutter all over the country, an increasing number of people will self-manage their abortions. Self-managed abortion, sometimes referred to as SMA, is when someone ends their own pregnancy outside a traditional medical setting. Over generations and across cultures, people have used herbs, tinctures, and various forms of community medicine to end pregnancies, but most people who self-manage today use abortion pills. Abortion pills include two different medications: mifepristone, which stops the body from producing progesterone; and misoprostol, which causes cramping that expels the contents of the uterus, essentially inducing a miscarriage. The FDA approved these drugs in 2000, but until recently, they could be legally dispensed only by a licensed abortion provider during an in-person visit.

During the pandemic, several things shifted: Providers in blue states began piloting abortion telehealth programs, the FDA dropped the in-person provision requirement on mifepristone, and organizations that provide safe, reliable medicine from overseas, such as Aid Access, expanded their scope of provision and began sending pills into all 50 states.

The drugs have always been safe and effective — in fact, they are considered medically safer than Tylenol or Viagra — but in a very short time, these drugs became significantly more accessible.

Abortion pills by mail are now a reality nationwide. Current polling suggests that about 60% of Americans know these drugs exist, but this number drops among those most effected by abortion bans, the people who need this information the most. This deficit in public knowledge, especially among marginalized communities, is an urgent matter of public health and a very clear place to push.

Currently, one of the best ways we have to expand abortion access is to elevate awareness that abortion pills are safe, effective, and available by mail in all 50 states. Three states have already banned abortion pills and more will surely follow, but laws will not make these drugs go away.

While some people will inevitably be criminalized for ending their pregnancies or helping others to do so, the vast majority of people who self-manage will do so safely and without consequences. Still, it’s imperative that we teach people to understand and mitigate legal risk at the same time as we are shouting from the rooftops that abortion pills exist.

We’re used to understanding our contributions to abortion access in dollar amounts, but sharing knowledge is free, and becoming an ambassador for such lifesaving information is priceless.

If you care about access, please learn about abortion pills — how to find them, and how to find legal, medical, emotional, and financial support — and then make yourself a resource for that information, at whatever volume you choose.

“This impact will fall disproportionately on poor and working-class people, Black and Brown people, and undocumented people — the same people who are being criminalized for ending their pregnancies in post-Roe America. This is not an accident: It is the project.”
Amelia Bonow

Everyone deserves access to in-clinic abortion care, and also, the vast majority of early pregnancies can be ended safely outside a medical clinic. It is very bad that clinics are closing, but abortion pills becoming commonly accessible outside medical contexts is a positive thing, both in terms of access and in terms of liberation.

But pills do not work for everyone, and self-managed abortion alone will not solve the problem of access. We must support abortion funds and practical support networks that do the critical work of helping people navigate logistical and financial barriers to access.

We need to pour support into independent clinics, which will be increasingly crucial as they continue to provide most abortion care later in pregnancy; act as plaintiffs in legal challenges to abortion bans; and work to meet overflowing need in states where access continues to be protected. Pills are certainly not the only front in this fight, but there is no reasonable strategic approach to meeting this moment that does not place increasing access to and knowledge of abortion pills at the forefront.

Abortion access belongs to us. It cannot be eliminated by decisions from courts, politicians, and regulatory bodies, and widespread defiance of abortion bans is inevitable. The saying has always been “You cannot eliminate abortion, only access to safe abortion,” but now, because of abortion pills, the ferocious commitment of activists and providers, and the internet, we have the power to build a functional system of safe abortion access in the absence of rights.

Scaling up the existing system in coming years will require not just money, but hands. Those who are able must find a way to plug in, whether by supporting existing organizations, becoming an ambassador for information, or starting something new. Over the last few months, when people ask what gives me hope, I tell them that Shout Your Abortion is unable to keep our “I Will Aid and Abet Abortion” T-shirts in stock. If enough of us make good on this promise, we will build a better world than the one we had before.

We must commit to facilitating one another’s care, for no money, for any reason, at any time. This is the energy it will take to create a movement that will eventually win back our rights, and when we do, we will make sure that this time we leave no one behind. When we build this movement, we will not simply undermine the impact of Dobbs, but the legitimacy of the court itself, and we will illustrate the path forward in a way that transcends the issue of abortion.

We must commit to saving ourselves, and to divesting from the authority of the U.S. government. It’s the only way through.

This article appeared in the “Resistance and Resilience” issue of Conscience Magazine. Subscribe today to receive the entire issue.

(she/her) is the cofounder and director of Shout Your Abortion, an organization working to normalize abortion and elevate paths to abortion access regardless of legality. She also serves on the board of Abortion Care Network. She believes that we are going to win.