Skip to main content
Toggle Banner
You can make an impact in the fight for reproductive freedom.
GIVE NOW

We seek to build a strong community of pro-choice Catholic advocates to promote public policy rooted in true religious liberty, social  justice, and respect for conscience. 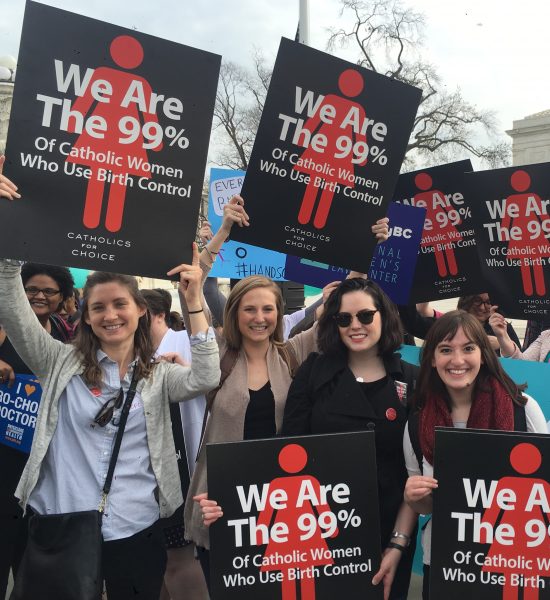 At Catholics for Choice, we strive to be an expression of Catholicism as it is lived by ordinary people and serve as a voice for the majority of Catholics — including over 70 million in the United States — who support access to comprehensive reproductive care, including abortion. We seek to build a strong community of pro-choice Catholic advocates and advance sound public policy rooted in true religious liberty, social justice and respect for conscience.  As pro-choice Catholics, it is our responsibility to speak up and remind our elected officials who they represent and how the majority of Catholics really feel about reproductive health, rights, and justice.

The proper role of government is to protect each person’s right to make decisions according to their own beliefs and values, not just the loud and powerful. Our anti-choice opponents claim to speak for all Catholics in denouncing access to much-needed reproductive healthcare, when in fact they represent only a very vocal minority. They are calling their supporters to action, telling policymakers that they are sources of expertise on Catholic people and policies. We must make sure that theirs are not the only Catholic voices being heard on issues of reproductive health, rights, and justice.

This is your home for pro-choice Catholic advocacy.

There are many ways to make a charitable donation to support our mission.

“My life is forever changed. I will continue to fight alongside this beautiful, accepting, and courageous community.”

“You all give me hope. I really love all your trainings and support… It’s definitely given me hope and strength to reconnect to my faith.”

Ways to speak up

The voices of pro-choice Catholics must be heard.