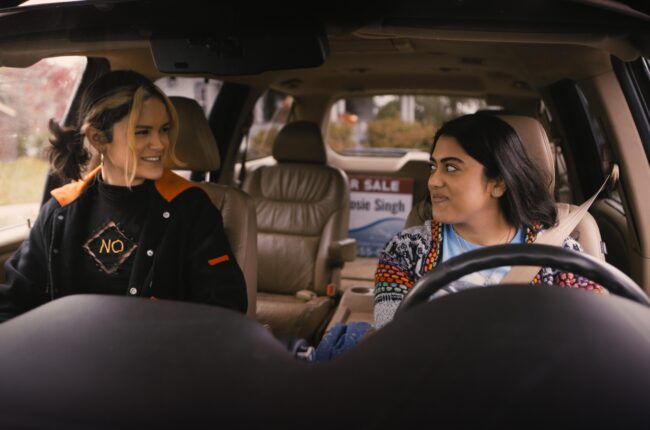 Debuting on Hulu in May, Natalie Morales’ newest film, “Plan B,” follows high school best friends Lupe and Sunny as they road trip across their home state of South Dakota to get the Plan B pill.

The film’s plot hinges on the moment Sunny, following a sexual encounter gone wrong, visits her local pharmacy with Lupe to purchase the Plan B pill. After requesting identification for both girls, the pharmacist refuses to sell emergency contraceptives to Sunny. “Any medical professional in the great state of South Dakota can refuse to sell birth control drugs to someone if it goes against their beliefs. And around here it does,” he explains.

Through this interaction, the film illustrates how conscience clauses prohibit comprehensive healthcare on a concrete, everyday level. But even with this vivid invocation of the conscience clause, the film fails to explain it and leaves much of the issue’s explanation to the brief line uttered by the pharmacist.

In reality, conscience clauses like South Dakota’s law impact people seeking emergency contraception in disproportionate ways — a dynamic that the movie does not always make clear. Specifically, the film fails to highlight the role that these exemptions play in creating higher barriers to low-income people, LGBTQIA+ people, and people of color. For example, Lupe and Sunny repeatedly withstand racist comments and microaggressions perpetrated by other characters, but the movie never addresses the systemic racism inherent in conscience clause-based refusals.

In discussing the regional divide in America’s reproductive healthcare, the film does a superb job of examining the ways that conscience clauses impact some groups more heavily than others. Set in rural South Dakota, “Plan B” underscores certain factors that complicate access to emergency contraception. Lack of widespread public transportation means that Sunny and Lupe must use Sunny’s mom’s car to travel across the state to a Planned Parenthood clinic. The scarcity of institutions offering emergency contraception — painfully common in rural areas and the Midwest more broadly — is evident throughout the film. With only one pharmacy in Sunny and Lupe’s hometown, the pharmacist’s refusal to provide Plan B blocks Sunny from obtaining emergency contraceptives anywhere local.

Later in the film, the permanent closure of the clinic Lupe and Sunny eventually reach after hours of driving vividly portrays the devastating lack of reproductive health providers in states like South Dakota. The closure of even one clinic creates significant problems for those in desperate need of services. South Dakota’s neighboring state of Minnesota provides a real-life example of this problem. In August, for example, Whole Woman’s Health of the Twin Cities was forced to cease all in-person operations as the clinic moved to a fully virtual format. This closure means that Minnesotans seeking abortions and other reproductive health services now have fewer options. Only three clinics offering surgical abortions of any kind remain in the state.

"Conscience readers can watch the film and redefine what it means to use one’s conscience for good."

Christianity and Plan B

The film ends with Sunny’s mother helping the girls purchase Plan B from the pharmacist who turned Sunny away. On the one hand, Sunny’s emotional breakdown in the parking lot of the shuttered Planned Parenthood speaks to the cruel reality that many face when conscience clause-wielding pharmacists and medical professionals make arbitrary decisions about what is best for the lives and bodies of others. On the other hand, the conclusion itself — in which the central conflict of the film is magically resolved — seems overly simplistic. The many Americans cruelly denied healthcare on the grounds of “religious freedom,” rarely get a second chance. Those who invoke the conscience clause will not suddenly change their minds. Rather than ignoring these harsh truths in favor of a manufactured happy ending, Morales and the writers of “Plan B” should have grappled with this unfortunate reality.

Reflecting on the importance of the film during a recent NPR interview, Morales spoke briefly about the role of Christianity in “Plan B.” “I was raised really Catholic,” she said, “and there are some themes in the movie that, you know, can be controversial in Christian households.” While Morales went on to explain her inclusion of explicitly Christian characters espousing values she would like to have seen as a child, her comment about the “controversial” nature of contraception suggests — wrongly, of course — that reproductive justice and Christianity are not completely compatible. Regardless of this interpretation, the conscience clauses that frame the action in “Plan B” rely on a very specific understanding of “conscience” and how it functions. In light of this knowledge, Conscience readers can watch the film and redefine what it means to use one’s conscience for good.

MARGARET HAMM, MTS, is a J.D. candidate at Boston University School of Law studying religion, gender, and American constitutional law. She is a recent graduate of Harvard Divinity School, where she wrote her master’s thesis on American Christian women’s responses to the legalization of the birth control pill.